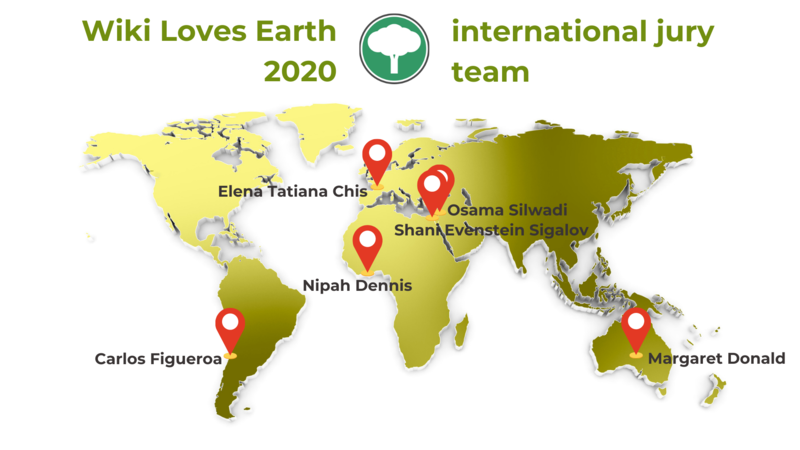 Osama Silwadi is a Palestinian photojournalist, visual storyteller, archivist and folklorist. He worked with several local press organizations, French Press Agency, Reuters. In 2004, he founded the Apollo Agency, the first Palestinian photography agency. In 2009, he founded and edited the “Wamid” magazine. Osama was a jury member of several photography awards and contests, such as “Youth Eyes on the Silk Road” organized by UNESCO, Wiki Loves Monuments conducted by the Wikimedians of the Levant user group in 2017 and 2018. Silwadi’s photos were published in leading international newspapers and magazines, such as National Geographic, Time and Newsweek. He also has held many local and international exhibitions, including in Palestine, Jordan, Egypt, United Arab Emirates, Italy, United States and France.

Carlos Figueroa is a Chilean dentist and active Wikipedian since 2005 and has contributed to Wikimedia Commons since then. As a part of Wikimedia Chile board since 2017, chair since 2020, he has been in charge of the “Chile in images” project which portrays the main cultural events in the country. Also, Carlos was a member of the national jury of 2018 and 2019 editions of Wiki Loves Earth, and jury for other photographic contests, such as “6 months that changed Chile” and “Revealing Sites”.

Margaret Donald is an Australian who finds it an extraordinary privilege to be able to see the world through others’ eyes. Her first contribution to Wikipedia was an image to the Australian Wiki Science competition 2017, where her photograph of Velleia paradoxa was among the winners. She continues to contribute plant images to the Commons and has already uploaded 1050 photos of plants & habitat. In May 2020, 10284 pages on 65 wikis were using her images. She also has been incorporating other plant & habitat images into articles in addition to uploading them. Her current projects include the incorporation into Wikipedia articles of Commons images from Kevin Thiele (Western Australian botanist), Jean & Fred Hort and CC-BY-SA-4.0, or CC-BY-2.0 images from Flickr, together with other images such as those from the Antarctic voyage of Joseph Hooker.

Shani Evenstein Sigalov is an Israeli educator, researcher and Free Knowledge advocate, focusing on bridging gender, language and social gaps. She works at Tel Aviv University, where she explores the intersection between technology, education and Openness. She serves as an EdTech Innovation strategist at the School of Medicine; she is a lecturer on campus, having designed and led courses related to Wikimedia projects, and she is currently pursuing her PhD at the School of education, focusing on learning via the Semantic Web, more specifically, using Wikidata as a learning platform. Shani has joined the Wikimedia Movement in 2011, and has been heavily involved in Outreach efforts: facilitating collaborations with Educational, Governmental, Medical, Research and Cultural Heritage institutions, giving workshops, training and lectures on Wikimedia Projects and openness, raising awareness to the gender gap and other knowledge gaps on Wikimedia projects and advocating for Wikidata and Openness of institutions. While serving on the Board of Wikimedia Israel, Shani has been involved in setting up Wiki Loves Monuments. She has a deep appreciation of art & photography and enjoys adding free-licensed media files to WikiCommons. She even participated in the #100WikiCommonsDays Challenge. As of 2019, she serves on the Board of Trustees of the Wikimedia Foundation.

Elena Tatiana Chis is an architect working in restoration and interior design in France. She is a part-time freelance graphic designer, passionate about photography (landscape and architecture), monuments and travel. Some of Elena’s photos were presented in different exhibitions, some of them published in architectural magazines and books, web articles (UNESCO), calendar (2013 KLM Social Calendar) etc. She discovered Wiki in 2016 through the Wiki Loves Monuments contest. That year, she got to the top 10 in the following countries: 1sr and 5th place in Morocco, 3rd place in Peru, 3rd and 4th place in Tunisia. The 3rd place in the national competition in Peru also became 42th place in the international competition. In 2017 Elena got the 3rd place for Wiki Loves Monuments Italy, Tuscany. In 2018 she was lucky again to get the 9th place in Wiki Loves Monuments France and next year she became one of the jurors of the French competition. Elena is also one of the Wiki Loves Monuments coordinators in Romania, since 2018. She is also one of the members of Wikimedians of Romania and Moldova User Group since 2018.

Nipah Dennis is a photographer based in Accra, Ghana. He graduated from Business School in 2018 with a degree in Financial Accounting. During his time at the university, he discovered photography from an online street photography publication. From there, he started reading about the medium and first started practising with his roommate’s iPhone before getting his first digital camera. He has worked in many different categories in photography before finally focusing on documentary and photojournalism where he finds fulfilling. Nipah is currently on the journey of finding the best practices in visual storytelling. Nipah aims to make photographs that demand consideration for the people who are represented, their daily life and ultimately their humanity. He is a contributor to Wikimedia Commons and a 2019 winner of Wiki Loves Africa.

🌎 Wikipedia is the world's largest encyclopedia that was established on this day in 2001. ⠀ 📷 Wiki Loves Earth contributes to illustration of Wikipedia. Since 2013, WLE participants uploaded 700+k photos to Wikimedia Commons, 85% of them illustrate articles! pic.twitter.com/XZEEw1FFFw

Meet one more Kingfisher in WLE 2020 top-15! The author perfectly captured the moment at the National Botanical Garden in Bangladesh. 🇧🇩 The picture gives us detailed information about the bird, its size and colours. List of winners 👉 bit.ly/3r49Wug pic.twitter.com/bs6ftKxC1G

Common Kingfisher (Alcedo atthis) with caught fish for feeding the children was captured on 13th WLE winning photo! 🇩🇪 Geo-Naturpark Bergstraße-Odenwald, Germany, has many species living in an area of 3,500 km². The full list of winners 👉 bit.ly/3r49Wug pic.twitter.com/bbKaOyKRPn